I saw your post answering Ana in New Jersey who had discolored fillings in her front teeth. My issue is similar. I had bonding done on several teeth due to sensitivity near the gumline. None of these fillings were done due to decay or for cosmetic reasons.

It was immediately obvious the wrong color was chosen for these fillings. I even had them put in a whiter shade than they were planning on. Plus they look opaque and rough. My teeth used to get compliments on their whiteness but not any more.

Is the solution to have all this bonding (roughly 15 teeth) removed and new bonding in the correct color placed? Or can new bonding be added to the bonding that is now about a year old?

If its removal, what are the risks?

Note : Several were just done as a removal of 15 year old bonding that was starting to chip etc. so for those teeth, if its removed, it will be the 2nd removal.

Riley,
I feel bad for you. Getting the color and texture right for these fillings isn’t that difficult to do. While I recommend an expert cosmetic dentist for smile makeovers or complex bonding, doing fillings at the gumlines of the teeth that have the correct color and are polished should be within the abilities of a good family dentist.

Do the fillings need to be totally replaced, or can they just be re-surfaced? That depends on how far off they are. My guess would be that another dentist could just remove some of the surface of these fillings and re-surface them with another color of composite. Although replacing them is no big deal. Even if they have to be totally replaced, there is very little chance of doing any damage to the teeth. Replacing the fillings a second time is also not a problem. It isn’t hard to tell where the composite ends and the tooth structure begins, especially if the color is off. Even if the color is similar, there are dental burs that will selectively remove composite without drilling away the tooth.

One point I’d like to make about doing fillings over these sensitive areas that develop at the gumlines of teeth. These are called abfraction lesions. 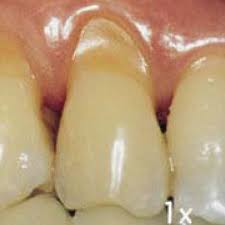 A tooth with an abfraction lesion

You can see in the photograph that the enamel of this tooth near the gumline has worn away, leaving a notch that is very likely to be quite sensitive to air or touch. It used to be thought that these lesions were caused by brushing too hard, but recent research has revealed that, while toothbrushing can be a contributing factor, the major culprit is excessive clenching of the teeth. Clenching causes the tooth to flex a little right at the gumline, and this weakens the tooth right there, which leads to the wearing away of the tooth at that point.

The reason this understanding is important is that it influences the choice of materials a dentist will use to restore this lesion. If the dentist uses a hard material that is stiff, the slight flexing of the tooth will often cause the filling to pop out. I wrote about this in a blog post several years ago: My fillings keep popping out. The dentist needs to use a softer, more flexible composite. A couple of examples of materials I gave were Silux Plus and Renamel. A slight amount of bending of the filling material with the tooth is all that is needed to insure that these fillings stay in.

Do you have a comment or anything else to add? We’d love to hear from you. Enter your comment below.

Dr. Hall,
I went to my dentist recently and he filled a front tooth. While in the chair he stated that he saw a small crack on the rear molar on the left side, and he said it needed to be repaired. He drilled the tooth out, banded it, and filled it with composite. I called him the next day because the tooth was extremely painful. Two days after he did the procedure I was back in his office, and after a cold test he said that I needed a crown and a root canal. I had him pull the tooth. Should I pay him for the extraction when there was no issue with the tooth, before he removed half of it, other than a small crack?
– Mark from Georgia

Nothing you told me indicates to me that your dentist did anything wrong. Yes, it’s possible, because I don’t know the whole story. But I’ve seen this sort of thing many times, and it sounds to me like your dentist did the right thing.

When you say that there was nothing wrong with this molar but a small crack, that’s not the complete story. A crack is almost always a symptom of a major underlying problem with the tooth. A tooth that is otherwise healthy will not have a small crack in it. From subsequent events, it seems clear to me that this tooth was already infected. Yes, working on it irritated it a little more and placing a well-sealed filling over the infected pulp of the tooth caused an immediate painful reaction. Had your tooth been healthy before your dentist worked on it and had merely had some accident during the procedure, your tooth would have started to get diseased and it would have taken some time for it to flare up. The fact that it was immediately painful indicates that this disease process was probably already pretty advanced.

The reason your dentist was concerned when he saw this “small crack” was that the tooth probably had a large filling in it. You didn’t say what type of filling, but almost all teeth with cracks have large fillings in them, usually amalgam fillings. The crack would probably indicate that there is some leakage around the filling, meaning that decay will be able to leak through and get under the filling.

Not being able to see the x-ray, and not having looked over the shoulder of your dentist while he was working on your tooth, I can’t say with certainty what happened, but let me tell you what probably happened, based on my experience with many of these situations. Your dentist removed the old, leaky filling, likely with some decay underneath it. The dentin that was left between the bottom of your cavity and the pulp of the tooth was thin but intact. However, dentin is porous, and because of how the tooth reacted it appears to be clear that bacteria from the decay had been able to penetrate that porous dentin to infect the pulp of the tooth, causing it to be slightly inflamed. Working on the tooth irritated it somewhat, as it always does. Your dentist then replaced the old leaky filling with a new composite resin filling, bonded to the tooth and tightly sealed. The well-sealed filling now caused the internal pressure of the inflamed pulp to increase, which is what caused your immediate painful reaction.

I’m sorry for your sake that you had the tooth pulled when it could have been saved, but that is water under the bridge now. If it was the tooth furthest back in your arch, that shouldn’t have a serious impact on your bite, but you might eventually end up also losing the opposing tooth because it now may have no tooth to chew against and will hyper-erupt.

My recommendation to you would be to have your dentist look at your entire mouth and all your old dental work with a new set of eyes, and replace any old, suspicious fillings with new, well-sealed composite fillings, to help prevent this from happening again.