So the Drudge Report yesterday linked an article from the British newspaper The Guardian about flossing. The link said, “Smile! Now experts decide flossing makes no difference.” The article in The Guardian is titled “Everyone recommends flossing – but there’s hardly any proof it works.” I’m not going to give the article any respect by linking to it–if you want to read it you’ll have to Google it.

But I can sum up the article in one word–ridiculous.

There is strong evidence through multiple scientific studies that flossing helps prevent both gum disease and interproximal tooth decay. In my dental practice, I could tell whether or not a patient was flossing simply by examining their gums. In fact, the science is so carefully calibrated that dentists can predict how long it would take a patient with inflamed gums to bring the inflammation under control with daily flossing. Two weeks of regular, daily flossing would do the job. In my practice that timing worked every time.

And rarely do regular flossers get interproximal tooth decay.

But if you go back and re-read the article, it’s fairly easy to detect the slant in the writing. Notice that the article doesn’t say there is no proof. It is titled there is “hardly any proof.” Think that through. That means there is proof.

Let me play this same word game with the benefits of showering. I could say something like this: “The vast majority of studies published in American medical journals fail to demonstrate that showering prevents body odor.”

Well, you may respond, the vast majority of studies in American medical journals don’t even deal with the subject of showering.

And this article in The Guardian is so stupid.

Kathryn from New Jersey asked me if she could wait to have a root canal treatment. She had a tooth that was recently filled, then went to a new dentist who said that there was something on the x-ray that looked like decay under the filling, therefore she needed a root canal treatment. See the earlier post: “There are a lot of things that can look like decay on an x-ray.”

Here is the x-ray she sent, with the tooth in question marked: 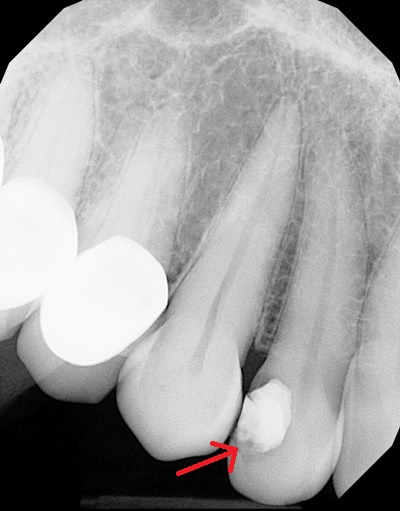 And here are my comments:

Kathryn,
Maybe there needs to be more training in dental school on radiographic diagnosis. This is by no means a case calling for plunging in and doing a root canal treatment.

Yes, I see the dark area under the filling, but I see three characteristics of this dark area that they are not telling you about:
1) While tooth decay will show up as a dark area, not all dark areas are decay. This could be a radiolucent base material under the filling, a gap in the filling, or decay – three different possibilities.
2) The dark area is on the surface of the tooth. If it is decay, the dentist should be able to poke that area with an explorer and it will be soft. You gave me no indication that they did this because you said, “There is what looks like some decay under the filling on x-rays.”
3) The dark area does not go anywhere near the pulp. Now there is an optical illusion that creates the impression that the dark area is directly under the filling and between the filling and the pulp. The way to deal with that is to cover up the filling, which is white, with your finger. Now look at the remaining tooth structure. When you do that, you can see the clearly defined margins of the dark area (decay would have fuzzy edges) and that they stop well short of the pulp. There are a good 2 to 3 millimeters of solid tooth structure between this radiolucent area and the pulp.

Now I can’t give a definitive diagnosis here without actually seeing your tooth and finding out more about what went on, but I can tell you that if they are just relying on the x-ray, there is no justification for doing a root canal treatment. There is no indication of inflammation near the root tip, which is the first indication of an infected tooth. And you are saying that the tooth feels fine.

Finally, there is some clear evidence on the x-ray that the root of the tooth is healthy.

If you look at a clearly healthy tooth – for example, the canine tooth next to this one. There is a thin white line that goes all the way around the root of the tooth. This is called the lamina dura. When a tooth gets infected, one of two things happens to this white line. It either becomes broken in the area around the root tip, or it pulls away from the tooth. When I look at the lamina dura of your lateral incisor, I can follow it all the way around the root tip. Because of the angle, the lamina dura appears more fuzzy than it does on the canine, but it is nonetheless there and intact. THAT is the key to the diagnosis of this tooth. The root is healthy.

I have had a filling in the back of my lateral incisor (#7) since childhood that has been replaced several times over the past 10 years due to leaky margins, etc. The last time it was filled was in January of this year when my then dentist placed a pulp cap to avoid a root canal. There was minimal bleeding and he used a caries detector with dye to remove any caries by hand to avoid drilling too close to the pulp and then filled it.

I did not have any discomfort to hot or cold or any pain afterward. I still do not have any pain in this tooth on tapping or when eating and it feels fine but it was discovered at my new dentist that there is what looks like some decay under the filling on x-rays during my last exam in June with my current dentist and she says I have to have a root canal and a crown placed.

My question would be; if there is no sensitivity/discomfort in this tooth, would it be possible to remove the filling, clean out the decay and then place another filling or do I have to accept the root canal/crown diagnosis? I have already researched and contacted Dr. Hurley in Bedminster for the crown after finding her on your provider list for New Jersey, but would of course like to postpone the “bigger” treatment if possible. Thank you so much in advance for your attention and advice and I love your very informative website.
– Kathryn from New Jersey

Kathryn,
I’ll go a step further even beyond your suggestion of waiting to have this root canal done. And I’ll be direct. No, I would not have this new dentist do a root canal and crown on this tooth. It sounds to me like they are a little too eager to do something quite aggressive here. Have another dentist look at this.

It’s interesting how you put the diagnosis – “It was discovered that there is what looks like some decay under the filling on x-rays during my last exam.” There are a lot of things that can “look like decay” on an x-ray. An empty space, a radiolucent glass ionomer base, or any of a number of radiolucent filling materials can “look like decay.” If the filling looks intact and isn’t leaking, after a close visual exam, I would leave it alone. If the tooth is infected, it would show up on an x-ray of the ROOT of the tooth.

A tooth that becomes infected will almost always hurt at some point, though there are exceptions. It will start by being sensitive to cold and ordinarily that will blossom into a full-fledged spontaneous toothache. The toothache, if untreated, will go away, and the tooth will die, after which it will usually become sensitive to biting on it. But that may not happen. It is uncommon for a tooth to die quietly, with no symptoms, but it does happen. The way to diagnose that is not by seeing something that “looks like decay under the filling,” but by seeing signs of infection around the end of the root of the tooth on the x-ray.

Finally, this idea of doing a crown on a lateral incisor after a root canal – I would not let them do that, even if it DOES need a root canal. A lateral incisor is a very thin and delicate tooth. To prepare a lateral incisor for a crown, most of the tooth structure has to be removed, leaving it very weak and vulnerable to breaking off. The average lateral incisor is going to have a diameter at the neck of the tooth of about 5 millimeters. To do a crown, at least a millimeter has to be ground off all the way around, leaving it with a diameter now of about 3 millimeters – which represents a decrease in resistance to lateral fracture of more than 60%. So, even though a back tooth with a root canal treatment needs a crown to keep it from fracturing, a front tooth is a completely different situation.

And furthermore, if you are going to have a single porcelain crown done on a front tooth, you definitely want a dentist with good artistic ability, such as Dr. Hurley, to do it.

– Dr. Hall
follow up: The next day, Kathryn sends an x-ray of the tooth, and I offer my opinion. It appears that this tooth does not need a root canal treatment. There is a dark area next to the tooth, but it doesn’t extend near the pulp, and there are definite signs that the root is healthy.