It used to be that when you needed a filling in a tooth, it was assumed that you would get what is called a silver filling. Sometimes they would be gold, and that was a second choice. Now, however, there are a number of choices.

Silver filling isn’t a completely accurate term. These fillings were developed in the 1840s, and were a mixture of mostly mercury, some silver, some zinc, and some tin. Later, copper was added and the amount of tin was decreased or eliminated. The more accurate term is to call them amalgam fillings.

In the twentieth century, composites were developed, and, as their technology improved, they became, starting in the 1990s, actually the preferred choice for many patients and many dentists. Originally, they had a high rate of wear. They were subject to microleakage, meaning that bacteria and microscopic food particles could get in the tiny space between the tooth and the filling and start new tooth decay. As technology developed, though, all these concerns were addressed. Dentists who are fully trained and experienced in doing them often only do these white fillings.

Here are photographs of amalgams on the top and composites on the bottom, so you can see the difference. Note that one of the amalgams is cracked. If the dentist had placed a pin in the tooth to help hold that side of the filling in, it probably wouldn’t have cracked.

But the other two amalgam fillings are holding up well. The one in the back molar is corroding, which isn’t necessarily bad. The corrosion products fill up the microscopic gap between the tooth and the filling and poison the bacteria that get into that gap, which helps protect the tooth. 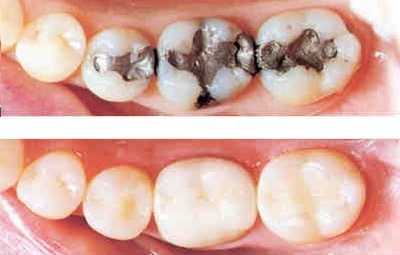 There are also other new white materials that can be used for fillings. Glass ionomers and related materials have been used for fillings since the late twentieth century, and they work very well for some situations. They aren’t as strong as composites or amalgam, but they release some fluoride, which helps reduce recurrent tooth decay around the fillings. They are used for root decay in adults, and they are used for baby teeth. They are simple and inexpensive to place.

This content was written by Dr. David Hall.
Click here to ask Dr. Hall a question of your own. He answers by email.

Other Information about Fillings