My experience over many years of providing dental care for children was that parents who worried excessively about preparing their children for their first dental appointment brought in children who were scared and needed to be calmed down. The parents were anxious, and this is why they felt that they had to carefully prepare their children. But the children, rather than simply believing their parents who told them that this was nothing to worry about, instead picked up on the signals that their parents gave and concluded that this was, indeed, something to worry about. 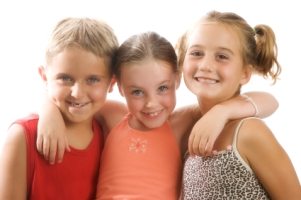 The most interesting example of a child reading his parent’s behavior rather than listening to his words was with one young boy who came to see me for a baby tooth that needed to be pulled. It had become loose, but because of the eruption path of the permanent tooth, it wouldn’t come out entirely on its own. The boy came in rather anxious. I was able to cajole and reassure him some, and he had finally settled down and had opened his mouth to give me access to the problem. At that point his dad, who was right there, said, “Now this won’t hurt.” The little boy immediately clammed up, and it was another several minutes before we could talk him through the very easy process of spraying the tooth with a little anesthetic and quickly flipping the baby tooth out.

The boy clearly did not believe his father, and the mere bringing up the subject of pain was enough to make him seriously wary.

I learned that telling a child “This won’t hurt” not only makes them suspicious, but may lose their trust, and for a couple of reasons. First, in spite of all that we do, there may be a little bit of pain involved in the dental work. Second, the mere anticipation of pain can make an otherwise normal experience painful. A child who is expecting pain can interpret a cotton swab as painful—I saw that happen many times. So be careful with this coaching. I enjoyed treating children, and I would let parents come into the room to give moral support. But I asked them to leave the coaching to me. I found it best to be honest with the children, and if I thought something might hurt a little, I told them so. I think this helped win their trust.

How would I prepare my child for her first dental visit? I would tell her that we’re going to the dentist, who is going to look at her teeth and clean them to make them all sparkly, and then we’re going to stop at the store. I would treat it as a rather ordinary experience, with maybe a little excitement thrown in, because in my heart that’s what I believe it’s going to be. A good pediatric dentist will throw some fun into every dental visit.

What is the worst way to prepare a child for a dental appointment? Without question, it is waiting until they have a toothache. That comes close to guaranteeing a poor attitude toward dental care that could persist throughout their life.

Other Information about Pediatric Dentistry