In 1985 I attended the LDS Academy of Dentists meeting in Provo, Utah where I took a course in cosmetic dentistry from Dr. Ron Goldstein, the grandfather of modern cosmetic dentistry. One of the subjects he lectured on was vital teeth bleaching, using a bleaching light. I decided to buy one of those lights and start bleaching teeth, and was excited at the results.

At the time I am pretty certain that no one else in Cedar Rapids was bleaching teeth. Maybe no one in Iowa. As I perfected my technique, I got some dramatic results and was able to get some interest from local news media. The Cedar Rapids Gazette ran a front page story in its Sunday Lifestyle section on what I was doing, and Channel 5 News sent a crew to my office and featured me on their evening news. I also did an interview on Channel 2. 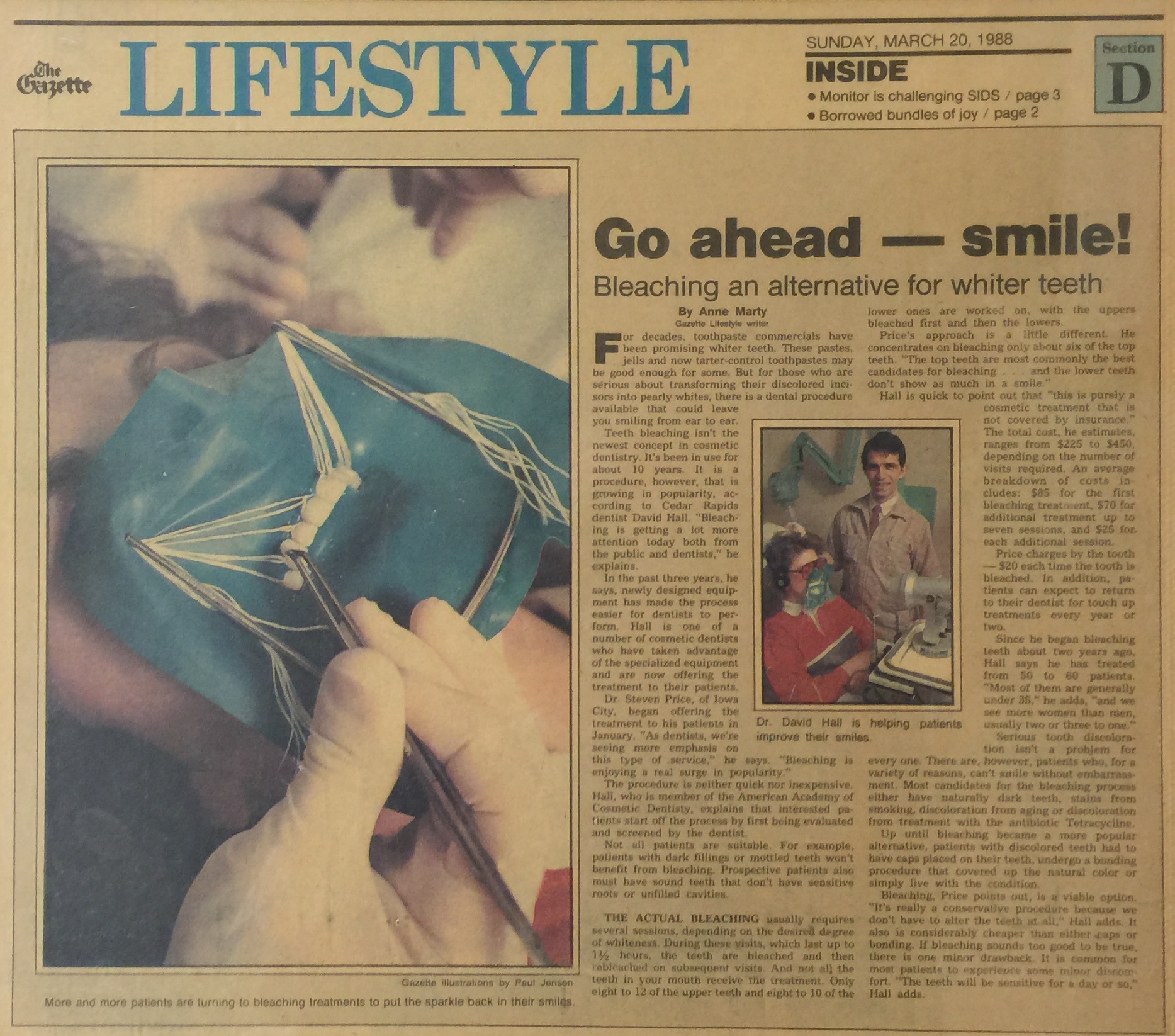 Click on the photo to see a larger version of the article, so you can read the text.

There’s an interesting story associated with this. To let people know this was possible, I began running small ads in the local paper that simply said, “Whiter teeth through bleaching . . . it works.” After a few of these ran, I got a call from Dr. Curtis Livengood, a local pediatric dentist who was the current president of the Linn County Dental Society. He accused me of deceptive advertising because there was no way to make teeth whiter, not really. He suggested that some discipline might be in order. I told him I could document my results and maybe what I should do is come before the board of the dental society and show photographs of my work.

Shortly after that, it might have been at the next monthly meeting of the Linn County Dental Society, they had invited Dr. Edward Swift to speak. He was a faculty member of the University of Iowa Dental School. He decided to lecture on the subject of teeth bleaching. He discussed the technique and showed before and after photographs of some of their cases. At the end of the lecture I approached Dr. Livengood and asked if he would like me to come before the board and show photographs of my bleaching cases. He mumbled that no, he didn’t want to do that.

I also approached Dr. Swift and told him that I found it curious that a dental school would be getting into teeth bleaching and asked what made them decide to look into this. He told me that there had been some media activity about teeth bleaching in Cedar Rapids and, as a result, they had gotten some calls asking about the subject, and that is what prompted them to look into it and try it out. So apparently I was the one that got this going.

Several years after this, in 1991, I published research that I did on teeth bleaching. I was quite pleased to have it accepted by the prestigious international dentistry journal, Quintessence International, and they made it their lead article in their September 1991 issue. In this research, I demonstrated that etching teeth was not helpful in bleaching them. This is one of the bits of information that helped propel the new home bleaching techniques, making teeth whitening easier, less expensive, and eliminating the risk of damaging the teeth. My research was quoted extensively in other journals and cosmetic dentistry textbooks.

Read more about teeth bleaching by consulting that page on this website.