Hello Dr. Hall,
I am at age 41 and have fully impacted horizontal bony wisdom teeth. My dentist said to remove them to avoid issues in future. Is it worth removing this late in age? I have a pano x-ray which I can send. I appreciate any honest feedback you can give.
– Ajay from Arizona

And here is the x-ray that he sent. I have cropped out the parts we don’t need for this post.

Ajay,
This is an interesting subject area, the prophylactic (preventive) removal of wisdom teeth that aren’t causing any problems currently.

I addressed the general question back in January in a post titled, Is Wisdom Tooth Removal a Racket? There are some articles in the popular media asserting that there is no need to remove any wisdom teeth unless and until they cause a problem. They assert that this is a scam perpetrated by oral surgeons who want to make money taking out wisdom teeth. I did a little investigating on the source of this erroneous thinking and found that a lot of this thinking is pushed by a Dr. Jay W. Friedman, who, it turns out, is actually an insurance company consultant. So the truth is that the idea that your shouldn’t preventatively remove wisdom teeth is a scam perpetrated by the insurance industry because they are trying to save money at the expense of the patients. You check with any dentist who removes many wisdom teeth, and I am pretty confident that their children have had their own wisdom teeth removed. That speaks to their sincerity.

But Not Every Impacted Wisdom Tooth Should Be Removed

However, I do believe the rule needs to be tempered. There is a judgment call to be made here. Let me explain how I would make that judgment, because, from the x-ray you have sent me, without the benefit of other clinical information, it doesn’t appear that you need to have these wisdom teeth out.

This is a risk-vs-benefit proposition. There are benefits to having wisdom teeth gone because there are problems that they can cause. I have seen some of those problems, and they can be nasty, even life-threatening in some cases. But there are significant risks associated with removal of wisdom teeth including pain, swelling, possible post-operative infection, nerve damage, dry socket infection, trismus, and other problems. So we weigh the risks of leaving them alone against the risks of removal and come up with a decision.

In your late teens and early twenties, the risks associated with wisdom tooth surgery are the lowest. These operations are fairly straightforward. The bone in the jaw, at this age, is fairly pliable. In addition, the roots of the wisdom teeth may not be fully formed, thus greatly simplifying extraction. But as you age, the roots not only get fully formed but they tend to add cementum, making the teeth in some cases fatter at the end of the root than near the crown of the tooth. Removal of teeth like this can be difficult. In addition, the bone becomes less flexible. All of this magnifies the risks of complications.

On the other hand, the longer you go with your wisdom teeth, not having had any problems, the lower the risk that you will have problems in the future. 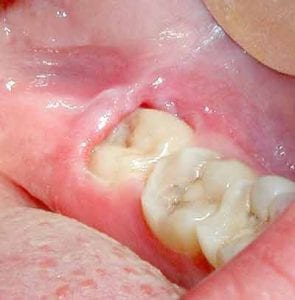 The wisdom tooth that is partially erupted and partially under the surface has by far the greatest risk of causing problems. Here is a photograph of such a wisdom tooth.
A partially impacted tooth like this is practically certain to cause a serious infection at some point, possibly when the patient is the most vulnerable. They tend to flare up during pregnancy or when the patient is weakened from some other illness. You can see in the photograph that the tissue that is over the tooth has a bluish tinge and looks puffy. Peeking under the tissue on the buccal side (opposite the tongue) you can see redness there. There will be a persistent low-grade infection around these teeth. Food gets under the tissue flap, and bacteria multiply freely because the pocket is impossible to clean. The pocket is also a source of unpleasant mouth odor. If an aggressive strain of bacteria gets into this pocket, or if the patient becomes weakened from some other illness, the infection will flare up and start to swell and hurt. I would tell my patients with partially impacted wisdom teeth that they were much better off choosing the time to have these teeth removed rather than having the time choose them.

The fully impacted wisdom tooth is a different story. With no opening to the oral cavity, there is no real risk of infection. There is a risk of cyst formation. I was taught about these cysts in dental school, but in over 20 years of dental practice I never saw a patient who had one, so I figured that this risk is fairly small. In younger patients, with the roots of the teeth not fully formed, there is a risk that the tooth could surface partially and thus become infected later. There is also a risk that a wisdom tooth could damage the roots of the second molar in front of it.

So that brings us to your case, Ajay. You can see from the x-ray you sent me that each of these teeth is fully under the bone—i.e. is a complete bony impaction. So the risk of them causing you problems is on the small side. Additionally, you have made it from age 20 to age 41, over twenty years so far, without them causing you any problems. And then if you look at the roots of these teeth, you’ll see that they have fattened up quite a bit from about twenty years of cementum deposition, so removing them will be a nasty experience. In addition, look at the nerve canal that goes through the middle of your jawbone back in the area of these teeth. Notice that on the left side the roots of that wisdom tooth impinge on this nerve canal. This greatly increases the risk of damage to the inferior alveolar nerve that goes through this canal. Damage to this nerve can cause you to lose all feeling in your lower lip on that side and all feeling to your teeth—a nasty complication.

I’m not going to prescribe treatment for you, since I don’t have any direct observation information or anything other than this x-ray. For that I refer you to your own dentist. But I will tell you this much. In my practice, I drew the line at age 40 for completely impacted wisdom teeth. If a patient got to age 40 without the tooth causing them any problem, I almost always recommended that they leave the tooth alone.

I will add that in your case, I would want a better look at your left side. That wisdom tooth appears, from the angle of this x-ray, to be pushing directly against the root of your second molar. I would want an individual periapical x-ray of that area at a different angle to see if that is the case and to inspect the root of the second molar for any damage. There could be something going on there that would argue for extraction.

I hope this is helpful.