Dear Dr. Hall:
I had asked my dentist to use a gold alloy crown on my root-canaled tooth #15. When I asked about the alloy that was used, my dentist hadn’t even obtained the alloy certificate from the dental lab. So he got it from the lab, and I found out that the crown was made with 35% Palladium, 30% Indium, 30% Silver, 3% Zinc and ONLY 2% Gold. While the root canal itself was done properly, I am very much worried about Palladium and especially Indium in my crown for systemic impact on my health and allergic issues (though the dentists say there is no apparent allergic reaction around the
tooth) which from certain on and off vague external and on face skin reactions. Are these materials questionable? Especially Indium which I believe does not have long history of use in the crown. I would greatly appreciate your response. Thanks.
I found you by searching for dental crown metals.
Ranjit from New Jersey

Ranjit,
I don’t have any good information about the incidence of indium allergy or indium sensitivity. I haven’t heard of any. When I search online, there are some questions about it but no hard data. Indium is frequently used in alloys for dental crowns, but it’s usually present at a much smaller percentage, maybe 5% or less. Its use in such a large amount here appears to me to be a way to make the alloy a little softer without using as much gold, thus making it a cheaper alloy. There are two reasons gold is such a good metal for dental crowns. One is that it will not corrode. Another is that it is soft and thus the margins of the crown can be burnished to the tooth to make an excellent fit of the crown, eliminating the gap between the crown and the tooth that can harbor bacteria that will cause recurrent decay. Palladium is a very hard metal, so the inclusion of indium and silver will make the alloy softer, helping it fit better.

Palladium has also come under question. Are there documented palladium allergies? I can’t find any. You can read my earlier blog post where I answer the question, Is palladium a toxic metal? Palladium is present in almost all dental crown alloys without any apparent adverse reactions.

Do you need to be concerned about possible reactions to this alloy? I don’t know. If you are sensitive, yes, you would expect to see some inflammation where your gum tissue touches the crown. You’re not having that, so that’s a good sign.

But I will tell you that I am very suspicious of what your dentist did here. You asked for a gold crown, and it’s looking to me like he found an alloy as cheap as possible that could be called a gold alloy. And I do not believe that your dentist didn’t get the identalloy certificate until you asked—I think he threw it away. By law, the laboratory is supposed to send that certificate with every case and the dentist is supposed to put it in the patient’s chart. Is this an effort to conceal or just sloppiness? I don’t know, but I’m suspicious.

Here is a sample of an identalloy certificate that should be sent by the laboratory every time a dental restoration is shipped to a dentist. This one is color coded yellow, meaning that it is a high noble or gold alloy. You may note that it has 2.6% palladium and 1.6% indium. 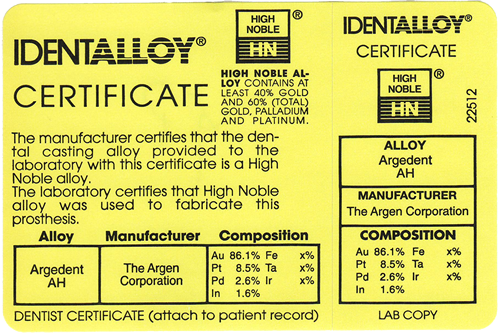 Please note the instructions at the bottom of the form: “DENTIST CERTIFICATE (attach to patient record).” I’m wondering why these instructions weren’t followed.

My advice here? If you have any reason to believe that you are having a reaction to this alloy, I would demand that your dentist replace the crown with a more suitable alloy or you will file a complaint with the dental board. In accepted terminology, your dentist did not give you a “gold” crown, which would mean using a high noble alloy. You got a semi-precious crown, which is a step below and cheaper.

Do you have a comment or anything else to add? We’d love to hear from you. Enter your comment below. Or click here to ask Dr. Hall a question.

Dr. Hall,
Recently from my periodontist who also does cosmetic dentistry I was fitted with 6 high noble porcelain-fused-to-metal crowns. I knew they were PFM crowns but later I discovered they are Encore crowns and contain 40% palladium. I have read of the toxicity of this metal and am concerned that there is such a high percentage of it in my crowns. I am now considering having them removed and considering e.max or even zirconia, whichever is the most inert. I hope you will advise me on what steps I should take.
Thank you for your time.
– Sandra from Delaware

Sandra,
I was struck by your question because I had never heard of palladium toxicity, and I try to keep myself informed of these things. Many dentists, I feel, are much too casual about metal toxicity issues. You can check other posts in this blog where I list various metals used by some dentists that cause sensitivity reactions. But palladium? I decided to do some research to see where this idea comes from.

In the movie Iron Man 2, Tony Stark has an arc reactor that keeps him alive and powers his armor, and this arc reactor has a palladium core. In the movie, the palladium is poisoning his blood. In the real world, however, palladium is a noble metal and a member of the platinum group, and is fairly biocompatible. Yes, there are compounds such as palladium chloride that are toxic, but that is very different from the pure metal. And remember, that we are not talking about putting this metal into the tissue but only putting it into a situation where you are in superficial contact with it.

Also, in doing an online search, I discovered a natural health website that alleged that palladium is a heavy metal that is highly toxic. (not true—palladium is a precious metal that is actually fairly light.) To put their claims in context, near the bottom of the page is a link for visitors to get themselves tested to see if they have palladium toxicity. The link takes us to a page that urges visitors to send in $325 for a hair mineral analysis. So if we follow the money it seems that we are discovering the motivation for their mis-information.

Almost every dental alloy that is used in making crowns and bridges has palladium in it. Like platinum and gold, palladium doesn’t corrode. Its presence in a dental alloy lends a certain amount of stiffness to the alloy, so it is pretty much required in stress-bearing dental bridges. Alloys without palladium tend to be very soft. 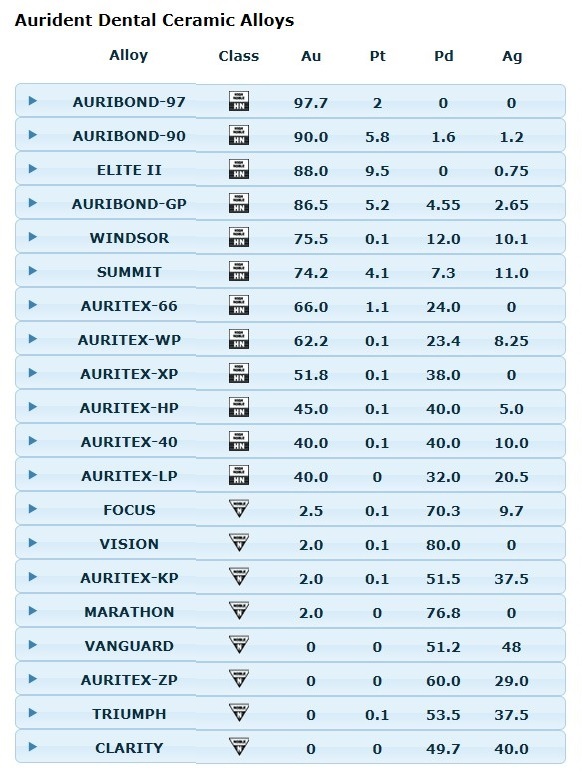 You can see the percentage composition of the various alloys. Au is gold, Pt is platinum, Pd is palladium, and Ag is silver. Notice that palladium, while it isn’t in every alloy, it is a component of more alloys than any other metal. When it isn’t present, the metal will be softer and will be more yellow in color. Soft is good in some situations. It makes the metal easy to burnish so that it fits tightly to the tooth. But a soft metal without palladium can also make the restoration susceptible to bending or breaking. The second column, labeled “class,” shows how the alloy is categorized. The square icon with the HN means high noble. These are alloys that have at least 40% gold and a total of at least 60% noble (precious) metals, of which palladium is one. Sometimes these alloys are simply called “gold,” and the term “porcelain fused to gold” is used. The triangles with the N are noble alloys that have at least 25% precious metals.

Even with gold alloys used in gold crowns, almost all of them have palladium in the alloy.

In my mouth, four of my crowns have metal in them—three gold and one porcelain-fused-to-metal—and I am pretty confident that each of them has some palladium content.

My opinion, Sandra—you don’t have anything to worry about, and as long as you are happy with how they look and aren’t having an allergic reaction, I would leave well enough alone. There are some instances reported of palladium allergy. If that is your situation, you will have symptoms such as redness in the gums around the crowns and/or an itching or burning sensation there.

Switching to zirconia? While rare, there are also some instances that have been reported of zirconia allergy. I had one woman write to me who, after going the rounds with several dentists, finally decided that she was allergic to the zirconia in her crowns. I have decided never to tell someone that it’s impossible for them to be allergic to some dental material. Sometimes it seems that putting anything artificial in your mouth carries at least a tiny amount of risk. Wouldn’t that be ironic if you are having no reaction to the palladium and switch to something else only to find out that you are actually allergic to the new material!

Do you have a comment or anything else to add? We’d love to hear from you. Enter your comment below.