I ran across a post on eonline.com that appears to be trying to poke fun at LeAnn Rimes for her dental malpractice lawsuit. 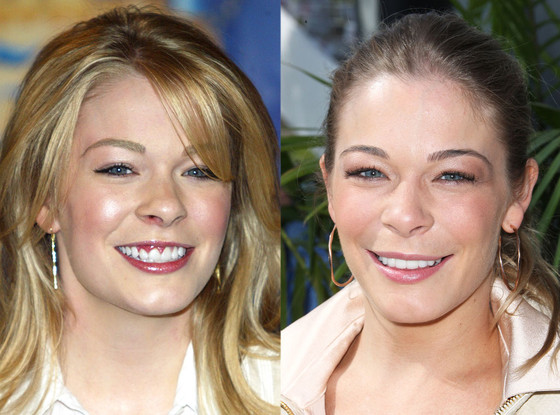 The implication is that her teeth appear to have problems “before” and look fine now. The comments get into a lot of ridicule of LeAnn, with some implying that she is just being litigious.

Here’s some added perspective, from a cosmetic dentistry expert. The “before” picture is NOT “before” any dental work was done. There is serious inflammation and swelling around her upper right central and lateral incisors revealing problems with the dental work on those teeth. The other teeth don’t have this inflammation around them, so I am confident that there is faulty dental work there.

Here is another pair of photographs. On the left is a very early photograph. The teeth seem to be smaller than in the “before” photograph above, which seems to bolster my point: 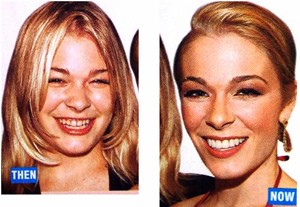 The “after” photograph, by the way, I believe was taken in 2010. The teeth look a little too large. And someone in my office remembers seeing her after the dental work was done and remarking to her son that the work didn’t look good and it appeared to affect her speech.

I get a lot of e-mails from patients who have been victimized by shoddy cosmetic dentistry. I can entirely believe that this happened to her.

When I am looking at photographs from dentists to possibly recommend on mynewsmile.com, I insist on photographs that show some gum tissue and that are enlarged enough to show whether or not the gums are inflamed. The presence of gum inflammation much less than what is displayed here will disqualify a dentist in my estimation and I will refuse to recommend them.

Click here to find a recommended cosmetic dentist and read some about how dentists qualify to be listed here.

Dr Hall:
When dentists send you pictures of their work, how do you know the photos haven’t been retouched? Also, since they pay to be included on your site, have you ever turned a dentist down because his work wasn’t good enough? Thanks.
– Mark from Massachusetts

Mark,
Actually, most of the dentists who approach me about being listed on mynewsmile.com are turned down. I have a whole file folder full of those requests. And sometimes it’s kind of awkward because I know the dentist, but if their work doesn’t measure up, I simply won’t list them.

You’ll notice that other sites that list dentists just list them – they don’t say they recommend them, they just list the name. But on mynewsmile.com, the wording specifically says that these cosmetic dentists are recommended. You don’t find that kind of wording on other dental directories. So I’m sticking my neck out to do that, and I need to have assurances that their work is good enough for me to put my name behind them.

As far as dentists altering the photos – I have never had an incident where I suspected that. In most cases when I turn down dentists, the dentist thinks their work looks great. So they wouldn’t even know how to retouch the photos to make them meet my standards. If they were artistic enough to make the photos look good, they would be artistic enough to make the cosmetic dentistry look good. Plus, I don’t rely on the photos alone, but I also use other credentials and reputation among other cosmetic dentists. I have had a couple of examples where the photos looked okay, but, reports from other cosmetic dentists who were familiar with the dentist’s work told me that their work was inconsistent, so I turned them down.

I also listen carefully if any mynewsmile.com visitor has a complaint about the work of any of our member dentists. I have had only three complaints. In the case of two of them, the complaints didn’t hold up under scrutiny. In one of those cases, the woman I think must have been surprised that I took her complaint seriously, and when I said I wanted to investigate it, she said that she had made a bigger deal of it than she should have and that she was actually pretty happy with the work. In the third case, the issue was easily resolved.

I hope this helps.