It wasn’t the University of Maryland.

Here is the story as given to me by Chip Halbauer, son of Dr. Stewart R Halbauer:

It’s amazing to me that people come up to my father telling him that the bridge he put in 30 years ago is still holding up. The short story is that, back in the 60s, a Proctor and Gamble executive came to my father because he didn’t want a partial and his bridges never lasted. My father built the so-called Maryland Bridge for him and he was a happy patient for years to come. According to my father’s colleague, Dr Harvey Oury, the P&G executive retired and moved to Maryland where his new dentist Dr. Livaditis, along with Dr Van Thompson, were amazed at the bridge. Instead of seeking out my father they took the idea and developed it at the University of Maryland as their own idea. I am trying gather his old dental records and patents to prove this fact. Again. I don’t want any money nor do I want to embarrass the other doctors! I just want to have my dad’s legacy known as my gift to him and his ailing health. 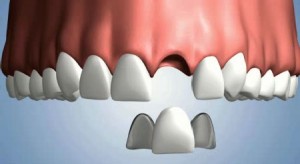 Thanks for that story, Chip. In all fairness, I guess we should rename the Maryland Bridge the Halbauer Bridge. Maybe that will catch on!