Dear Dr. Hall
I was so thankful to find your website. I have been so upset for the last three weeks since these crowns have been in my mouth. I had 6 porcelain crowns on my upper front teeth. I selected color BL1, because I wanted really white teeth. My own teeth have always been very white.

But when I got the crowns, it didn’t seem to me that they were the color I selected. And now, on top of everything else, they are getting yellow. If I have a cup of coffee or something else, it seems like it stains the teeth a little. I have a consultation appointment this coming Monday about this, and I’m hoping you can give me some good advice. I haven’t been smiling because the crowns have yellow on them. I have been using Supersmile toothpaste, but it doesn’t seem to help.

My dream of beautiful white porcelain crowns is now a nightmare!

I have been looking at another dental office near me, [name redacted], and wondered if you would recommend this dentist.

Yours
Janyce in Miami, Florida

I found this blog searching for yellow crowns.

Dear Janyce,
I have a couple of things to say about your case.

If these are truly porcelain crowns with the glaze intact, they will not stain or pick up any yellow color. I have known a case where a patient was told she was getting porcelain veneers, which soon began to stain, and it turned out they were made from a cheaper resin substitute. I would be very surprised if that were done with crowns, but I guess it’s possible. It’s also possible that something has happened to break the glaze on your crowns. That can happen with power polishing equipment such as the Prophy Jet, or it can happen with a fluoride treatment at a dental office, if they use acidulated fluoride instead of neutral fluoride. Acids in general, such as the citric acid present in lemons and other citrus fruits, ascorbic acid in vitamin C, or the hydrochloric acid that would come up from your stomach in acid reflux, will not affect the porcelain at all. But the acid in acidulated fluoride is hydrofluoric acid which will etch the glaze away and leave your crowns with a satin, slightly rough and porous surface that will pick up stain. And, if that is happened, Supersmile toothpaste won’t take the stain away, because it has become embedded in the pores of the porcelain. Supersmile dissolves the protein pellicle on your teeth to which stains attach themselves, so it is very effective on teeth, but it also has low abrasivity, so it won’t remove stains on a rough surface.

You may want a second opinion from an expert cosmetic dentist to determine if something like this has happened.

But I also wanted to add a point about the color of your crowns. Admittedly, I don’t know the full details of your case, but I want to make some generalized comments here for the benefit of the readers who could be making some not helpful assumptions from reading the sketchy details we have 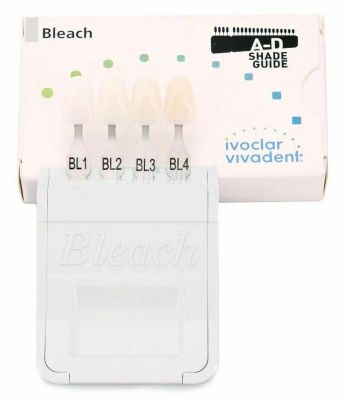 You said that the shade you picked was BL1. This shade is white beyond the whiteness of any natural teeth. On the right is a photo of the Ivoclar shade guide for bleached teeth. This shade guide was invented in the early 90s after bleaching began to become popular and the conventional shade guides that had been used for many years didn’t have samples matching these now super-white teeth that were whiter than any teeth that had been seen before. Your natural teeth could not have been this shade without having been bleached.

Here is the complete shade guide with the bleached shade extensions off to the left. The shade B1 is the color of very white natural teeth, and was the whitest shade we ever saw as dentists until the advent of teeth bleaching. The most common shade of adult teeth is probably A2.

If you had not bleached your teeth, and you had come to me wanting 6 porcelain crowns on your upper front teeth, there is no way I would have given you crowns with a BL1 shade without addressing the color of the teeth further back. Otherwise, they would look fake because your darker premolars would be showing when you smiled, leaving you with a serious mismatch in colors. I would, of course, have told you that to give you the chance, if you were adamant about that request, to get that done by a different dentist. If you had wanted me to do it, there would be two ways we could get a match with the other teeth. For one, we could first bleach your teeth to see if we could get them that white. Or, we could do porcelain veneers on the remaining two or four upper teeth that show in your smile. You can get away with having the lower teeth be darker than your upper teeth, because lower teeth tend to be in the shadows anyway and it is natural for them to appear a little darker. But having a mismatch between the front six teeth and the premolars is not quality cosmetic dentistry.

About Getting a Second Opinion

It sounds like you’re already thinking about seeking a second opinion, which I think would be a good move. But I wouldn’t go to the dental office you suggested to me. I checked out their website, and there are two red flags. The first is that they have no smile gallery displayed. Any dentist in the Miami area who is serious about cosmetic dentistry is going to have photographs of successful cases, and is going to be eager to display those publicly. The office you suggested to me has no smile gallery. Also, while the information on the website about smile makeovers is fairly detailed, it shows to me a lack of artistic sensitivity and no depth of knowledge about the procedure. For example, it says that the color you want for the veneers will be picked after the teeth are prepared, an impression taken, and the case ready to send to the lab. But the final color is fundamental to the case and should be decided in the initial consultation, as well as the particular smile design you want, which isn’t mentioned. Finally, the doctor shows no cosmetic credentials—no post-graduate training in cosmetic dentistry or any accreditation. So I would definitely pick someone else. We have several recommended cosmetic dentists in the Miami area that you can check out.

Do you have a comment or anything else to add? We’d love to hear from you. Enter your comment below. Or click here to ask Dr. Hall a question.

I have a question would like you to help me. I have 8 veneers on the fronth teeth and I am wondering will the veneers loosen or break when a hygenist use dental tools to clean along the gumline during regular cleaning? Thank you and I look forward to hear from you.
Sincerely,
Vu from Ontario

Vu,
This is a good question. No, the hygienist won’t pull the porcelain veneers off or break them. They’re too strong for that. But yes, you do need to be concerned about possible damage that a dental hygienist can do to your porcelain veneers–she or he could chip them or dull the surface. It’s safest to have your cleaning done in the office of an expert cosmetic dentist, but if you have this checklist of “no-no’s” to give the hygienist, and you’re up front about what you want the hygienist to do and not do, you could have your veneers cleaned in any office: